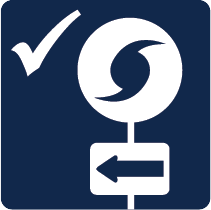 Residents in low-lying areas, barrier islands and mobile homes should seek shelter when conditions warrant. Many coastal roads could be underwater well in advance of a storm, restricting their use as evacuation routes.

If you are going to leave the area, be prepared to evacuate early and head inland to avoid the high winds and heavy rains preceding a storm.

If an evacuation is called for, and you do not evacuate, you will be without fire rescue, law enforcement or emergency medical support until winds and waters subside.

If your home was built after 2002, and you are not in an evacuation zones, you may be more comfortable sheltering in place. A 2005 University of Florida study concluded that homes built under the 2002 Florida Building Code sustained less damage on average than homes built between 1994 and 2001 under the Standard Building Code. Homes built before 1994 also fared worse than those built after that year.

Stay with a friend or leave the area
Emergency management agencies recommend you arrange a “host home” outside the evacuation level. A host home is the home of a friend or family member who has agreed to provide temporary shelter for you and your family. Ask an out-of-state relative or friend to serve as the “family contact.” Make sure everyone in the family knows the name, address and phone number of the family contact.

Move to an evacuation center
In the event of a hurricane watch, Sarasota County will open all evacuation centers at the same time. Hurricane evacuation centers are not hotels and will not be able to provide any conveniences or luxuries. You will have no privacy, limited space approximately 20 square feet per person in a public classroom or hallway, and meal service may be delayed. Evacuation centers cannot provide bedding, cots or blankets.

How to get to an Evacuation Center

If you cannot drive to a rally point:

Before you go
to a center:

Locate the water shut-off valve for your residence. The valve is generally on the side of the house nearest the water meter/backflow prevention device, or may be inside the garage.

Turn the valve to the off position. This will help minimize damage to the interior of your home should a pipe burst.

Follow the manufacturer’s recommendations for turning off your pool and/or water heater and unplug them, and switch off the circuit breaker.

Place an ice cube or two in a sealed plastic bag or small container in the freezer. If the ice cube has melted down from its original shape by the time you return, you'll know the power was off for an extended period of time and that you should throw out any food.

Turn off the power and shut off the water valve to your irrigation system.

Remove loose items, decorative and otherwise, outside the house and in the yard, and place them inside.

Alert friends or family members of your plans and how they can contact you.

Your children’s immunization and other important health and insurance records.

Each family member’s medications, along with dosage information and physician’s contact information.

Book or electronic entertainment items with headphones and chargers.